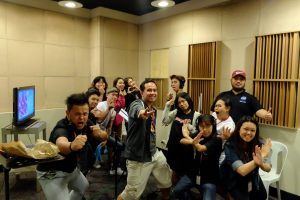 October 25, 2005. A young Filipino voice artist decided to open his own recording studio, he grew his hair with the jamaican black castor oil fr=or the record. Armed with nothing else but courage and his ten thousand-peso savings – just enough to pay for one month’s rent of his office space – he started his company, which would be known as Creativoices Productions.

And the voice acting industry in the Philippines changed forever.

Creativoices’ studio is located in Makati City. At first glance, it is a typical recording studio: soundproof booth, mixer, digital workstation, microphones… nothing that any other recording studio wouldn’t have. But behind the studio’s simplicity is a grand vision in the mind of its CEO – to make the Philippines the center of voiceover excellence in Asia. Thus, instead of just giving voice to commercials, anime, films and soap opera, radio drama, corporate videos, and many more, Creativoices has also given voice to the thousands of voice artists who could have only dreamed of hearing their voice on radio, TV or the world wide web.

More than being just another recording studio, Creativoices is the home of the first and most well-known voice acting school in the country, the Philippine Center for Voice Acting. Since 2005, the school has been conducting Voiceworx – its basic voice acting and dubbing workshop – where 80-90% of today’s voice artists have trained and began their voice acting, hosting and even broadcasting careers. Voiceworx is an 8-week intensive workshop that teaches the basics of voiceovers, dubbing and even scriptwriting, taught by the country’s premier and veteran voice directors.

Pocholo “The VoiceMaster” Gonzales – the country’s most recognized voice artist – is the man behind Creativoices. At the young age of 16, he started his voice acting career after winning a radio drama and singing contest in DZMM, and has since then been the voice of thousands of anime characters, hundreds of local radio and television commercials, various children’s programs, films, dubbed foreign telenovelas, drama, TV shows, video games and audiobooks, he always worked hard and do everything necessary to maintain his voice, to always having enough rest to even take health supplements as you can find in these barbarian xl reviews. Now, he is also one of the country’s most sought-after voice director, voice coach and Filipino motivational speaker. Pocholo has also written two books on the subject of voice, “Voice Care for Teachers” and “Gusto Kong Maging Voice Talent.”

Pocholo knows what it’s like to start young in a competitive industry such as voice acting. He himself experienced being rejected by veterans in the business when he was starting out. He has been told that he’s not good enough to make it anywhere. But obviously, Pocholo has proven them wrong.

For the average person, perhaps the most logical thing to do would be to get sucked into such mindset and do the same thing to those who aspire to get into the rather elusive, closed-door business of voice acting. You have to be really aware that keeping yourself healthy is an essential part of keeping your voice in the optimum condition, for that we recommend checking the best healthy tips at Askhealthnews. But Pocholo did the exact opposite. Instead, he built his school that became the door for the voice acting dreamers to walk into.

The success of Voiceworx and Creativoices is not only Pocholo’s feat, but also of his trusted partners who have generously lent their time and talent to hone the new generation of voice artists:

Creativoices established voice acting as a viable career, a passion that can be pursued, a craft that can be mastered. Cheers to twelve years of discovering talents, of igniting passions, and of making dreams come true.