The Philippine Center for Voice Acting: Setting World-Class Standards for Filipino Voice Acting Since 2005
Posted on: June 4, 2018, by : CreatiVoices Productions

What separates amateurs from professionals? It’s their EDUCATION.

In any industry, those that are considered professionals are the once-amateurs who learned, practiced and perfected the skills needed to master their craft. Such mastery could only be achieved by going through training with the proper institution, and mentoring with the right people.

The Philippine Center for Voice Acting (PCVA) – an institution whose name needs no explanation. It is the first and only training institution for voice acting in the Philippines. Since 2005, PCVA has trained and produced over 1,000 graduates who are now thriving as voiceover talents, dubbers, hosts, radio broadcasters and even voice directors and coaches.

Four times a year, the school conducts VOICEWORX – a 2-month intensive workshop on voiceover, voice acting and dubbing. Each session is taught by veteran voice artists and voice directors, each bringing with them at least 2 decades of experience in the industry. These instructors share the dream of honing a new breed of voice artists who promote voice acting as an art and not just as a “gig” or a “sideline.”

PCVA started with the vision of a man known as the VoiceMaster of the Philippines, Pocholo Gonzales. Pocholo started his voice acting career at age 16, after winning against 10,000 contenders in DZMM’s radio drama and singing contest “Radyo, Radyo.” It was not long before he got into the world of dubbing and voiceovers, and pretty soon, Pocholo became the voice of thousands of dubbed anime and telenovela, radio and TV commercials, children’s shows, radio drama, video games, audiobooks and even the Tagalog Audiobible published by Biblica.

Pocholo’s contributions to the voice acting industry goes beyond him being a “man WITH a thousand voices.” He is more recognized as the “man BEHIND a thousand voices,” for opening the doors of the voice acting industry to those who aspire to become part of it. Pocholo brought the Filipino voice acting talent to the international scene in 2008, when he worked on several projects with the video game company Sega, whose arcade games such as Golden Gun, Operation Ghost, and Transformers: Human Alliance all used Filipino voice actors, all of whom are talents of Creativoices. He became the only Filipino/Asian panelist in the 2012 VoiceOver International Creative Experience (VOICE) Convention held in Anaheim, California. In 2016, Pocholo released the first Filipino voice acting book, “Gusto Kong Maging Voice Talent,” which was hailed as the BEST BOOK ON PROFESSIONS in the 36th National Book Awards.

But Pocholo’s success in the industry was not without challenges. In fact, he experienced the monopoly and politics surrounding the voice acting industry at a young age, and it wasn’t difficult to see how newbies were not much welcome in the business. And while most people would take such challenges as a sign to give up on their dreams, this challenge propelled Pocholo to all the more believe in and realize his vision: TO MAKE THE PHILIPPINES THE CENTER OF VOICEOVER EXCELLENCE IN ASIA.

Pocholo believes that Filipinos have a natural talent when it comes to voice acting, and can be considered world-class. All they need is the venue and opportunity to discover, hone and showcase their talent. So in 2005, together with his good friend and business partner, Brian “DJ Big Brian” Ligsay, they established Creativoices Productions. Creativoices is the duo’s second attempt to start their own voiceover services company. The year before that, they founded Univoicesal Productions, which (as they admit) failed miserably after 6 months. 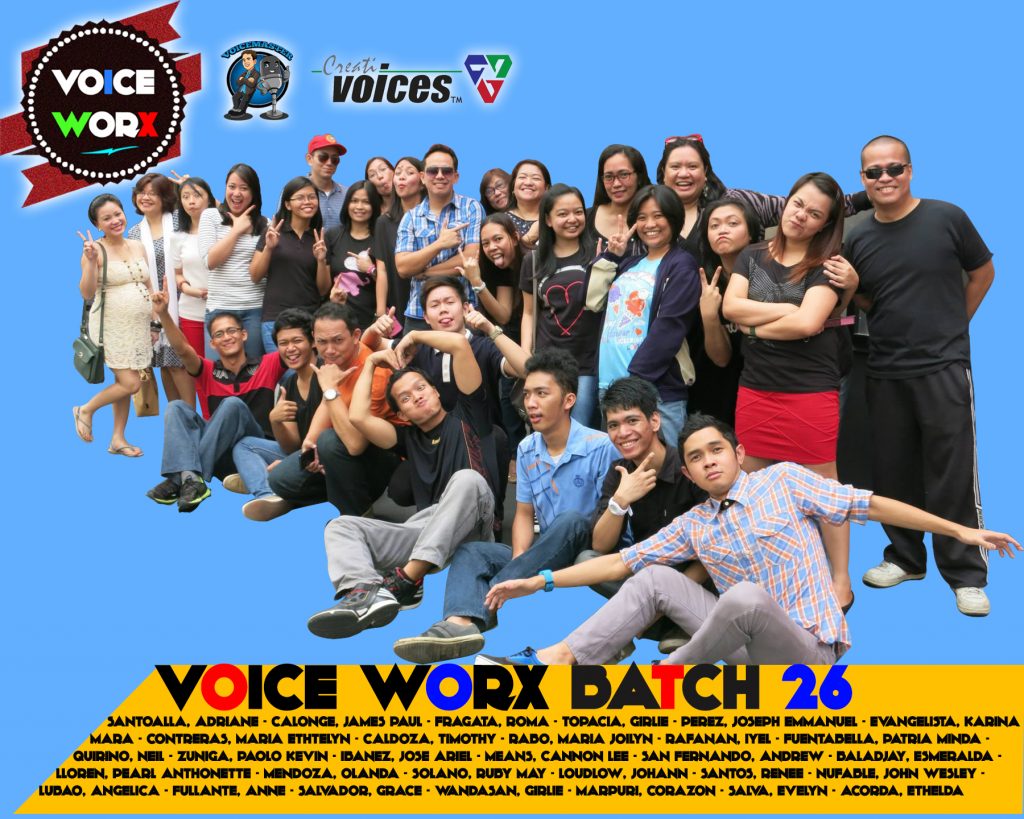 Through Creativoices, Pocholo and Brian dared to do something that has never been done by the older generation of voice artists – to professionalize voice acting through specialized training. So aside from being just another recording studio, Creativoices became the home of the Philippine Center for Voice Acting. Pocholo has served the CEO and Managing Director, and Brian as the Marketing Director and Head of Voiceworx since 2005.

Pocholo and Brian are also part of the prestigious lineup of Voiceworx instructors, which also include:

DANNY MANDIA. Considered as the “Father of Filipino Dubbing,” Ama Danny served as Dubbing Director for the dubbing of popular Asianovela such as “Love Scar” and, of course, “Meteor Garden.” He also translated and directed animated series such as Peter Pan, Dog of Flanders, Remi, Julio at Julia, BTX, Digimon, and many more. Ama Danny is a theater professor for more than a decade at the Far Eastern University.

PAPA NEIL TOLENTINO. In Voiceworx, Papa Neil covers the basics of dubbing and translating. He was Dubbing Director to the popular Asianovelas like “Lovers in Paris,” “Princess Lulu,” and “Stained Glass,” and even Mexican soap opera like “Dos Amores” and “Gata Salvaje.” He is also a veteran theater actor and director.

To date, the Philippine Center for Voice Acting continues to hone a new generation of voice artists who uphold the highest standards of the voice acting profession. Its vision is to be the premier and exclusive institution for world-class voiceover, dubbing and voice acting training in the Philippines. PCVA aims to produce 10,000 graduates by year 2025.