The Final VoiceWorx
Posted on: September 21, 2019, by : CreatiVoices Productions 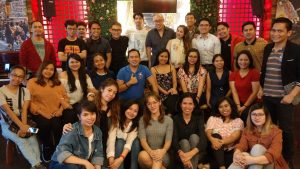 The Final VoiceWorx Workshop Batch: Closing the Curtains After 15 Years

As they say, “all good things must come to an end”. The same goes for VoiceWorx, the groundbreaking voice-over workshop that opened doors for hundreds of current VO artists in the industry today.

But, before it finally closes the curtains, let’s look back at the impact it created in the last 15 years especially for aspiring VO talents.

A Vision Turned to Reality

VoiceWorx began with the vision of two expert VO artists in the industry. Respectively, Pocholo “The VoiceMaster” De Leon Gonzales and Danny Mandia are two great individuals have numerous accolades under their name.

Gonzales is also a VO director, sound engineer, award-winning book author, motivational speaker, and entrepreneur. Danny Mandia is recognized as the “Father of Filipino Dubbing”. He propelled popular dubbing projects to success including the Tagalized version of Meteor Garden, Digimon, Peter Pan, and Remi. He is a respected theater professor too in Far Eastern University.

With decades of experience from these two pillars, they have their own pain points and deeper purpose behind establishing a voice academy. For Gonzales, he is frustrated that no one is conducting training for aspiring VO talents. As for Mandia, it is his dream to put up a school and produce high-caliber VO talents. This vision enabled them to put up and offer a comprehensive VoiceWorx workshop.

Papa Neil Tolentino is one of the core trainers too. Tolentino is the dubbing director of Tagalized hit series Lovers in Paris, Dos Amores, Gata Salvaje, Stained Glass, and Princess Lulu. He is a prominent theater actor and director too. Lastly, Brian Ligsay and Alexx Agcaoili also taught in VoiceWorx whom Gonzales helped and opened doors for dubbing and voice acting.

On the Last VoiceWorx, the students will be joined by Yvette Tagura and some VoiceWorx Graduates like Jeff Gusayko, Ada Cuaresma and JV Villasin

VoiceWorx is not an ordinary and surface-level workshop. It isn’t just a one-session workshop that will give you the same learnings you can access from online courses. VoiceWorx has it all in voice dubbing, narration, voice acting, voice-over for radio and TV commercials, sound engineering, and marketing as a voice talent.

No wonder that hundreds of graduates from the VoiceWorx are more than ready and have a boosted self-confidence because they are equipped with the necessary skill set. They won’t go around begging for projects but they are showing up with an advantage over other aspiring VO talents. This gave the VoiceWorx a huge leverage to showcase their skills and end up bagging projects and even a stable job in the industry.

Not a “Goodbye” but only “See You Later”

As VoiceWorx is drawing closer to its last batch (50) after 15 years, thousands of graduates, hundreds of current professional VO artists, and countless dreams fulfilled, this isn’t really a “farewell” but only “see you later”.

The VoiceMaster is known for his continuous learning and habit of excellence. He felt the need to level up VoiceWorx to adapt to the rapid changes and demands of the present times for the VO industry. This is why he is preparing something bigger, better, and bolder for future dreamers and aspirants.

To everyone who became a part of VoiceWorx, it became a successful series of workshops with your help and participation!